9К132 «Sturm-SM» upgraded self-propelled anti-tank missile system is intended to destroy modern and prospective tanks, including those equipped with dynamic protection, low-tonnage surface targets, low-flying air targets, defenses, manpower in shelters and in open areas during the day and at night in simple and adverse weather conditions and in the presence of dust and snowy conditions.
Presentation.pdf
(483kb) 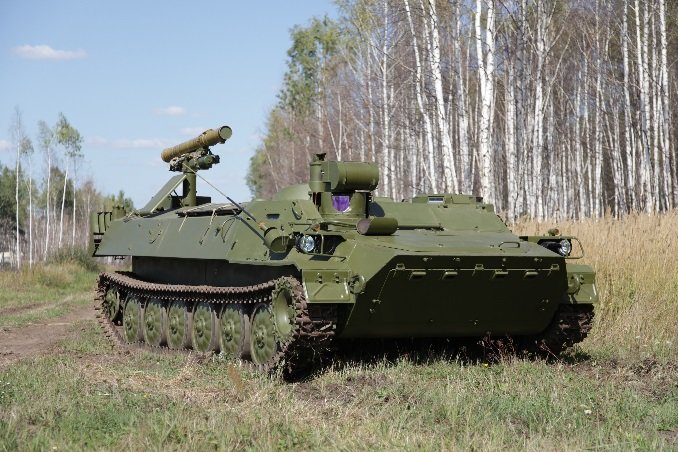 9П149М combat vehicle is intended to combat mobile and stationary ground and air targets, short-term storage, transportation, launch and guidance of 9M120 missile and its modifications to the target and is a self-propelled launcher equipped with means for detecting targets, missile guidance, communications and power supply.

9П149М combat vehicle is based on МТЛБ chassis. The 9П149М crew consists of 2 persons. Machines have high maneuverability and are capable of operating in the conditions of the damaging factors of weapons of mass destruction. 9P149M combat vehicle ammunition is up to 10 - 12 9М120 (9М120-1) and 9М120Ф (9М120-1Ф) missiles in an automated combat pack. Loading a retractable launcher from an automated combat pack of combat vehicles with a choice of rocket type is performed automatically. Loading missiles into the ammunition is done manually. On the retractable launcher of combat vehicles is one container with a missile.

9П149М combat vehicle is equipped with a thermal television control device and a command radio link.

The missile is made by «duck» aerodynamic scheme. In the tail of the rocket are located instrumental part of the rocket.

The working letter frequency of the rocket radio receiver, corresponding to the letter frequency of the command radio link, is set mechanically before loading, the code of the command radio link is set to the hardware part of the missile by applying voltage to the launcher contacts. Switching to the laser channel mode of guidance and its letter is set by the voltage on the contacts of the launcher

The type 9M120-1 rocket in the container pipe, mounted on the launcher, makes it possible to fire after the carrier overcomes a water barrier to a depth of 5 m.

Сontrol test machine is intended to test 9П149М and 9П149 combat vehicles operation as well as to troubleshoot with an accuracy to a constructively replaceable unit without disconnecting cable communication lines and removing equipment from the test object, as well as to monitor the units from the group spare parts and accessories setting up the equipment after replacing the faulty unit..

9В868М control test machine incorporates with 16 kV·A electrical installation with a voltage of 380 V (three phases with a frequency of 50 Hz) for autonomous power supply of both the inspection machine equipment and the object being inspected, with power taken from the motor shaft of the base chassis. Inspection machine can be powered from an external AC mains voltage of 380 V ± 10% with a frequency of (50 ± 1) Hz. .


The method of controlling the parameters of the combat vehicle and SPTA units of the equipment of these products is parametric, tolerant

Machine time checking one combat vehicle without taking into account the time of connecting and disconnecting cables - 2 hours.

The deployment time of the control test machine from the traveling position to the working position is 2 hours.

Closing time of the control test machine from working position to marching - 15 min.

Duration of continuous work is 8 hours

The time of control test machine readiness for operation from the moment of power-up is 30 minutes.